We use high-quality LEDs as the luminous component so that the light color of the LED strip lights is pure, soft, no glare. LED Strip Lights are not only used for decoration but also stay for lighting purposes. LED strip using very software FPC as the substrate can be arbitrary bending without breaking. Whether it is LED or FPC, it is made of environmentally friendly material, which will not cause pollution and damage to the environment due to massive use. The flexible strip light is connected to a smart controller, controlled by a smartphone APP or smart home platform, such as Google Home, Amazon Alexa. 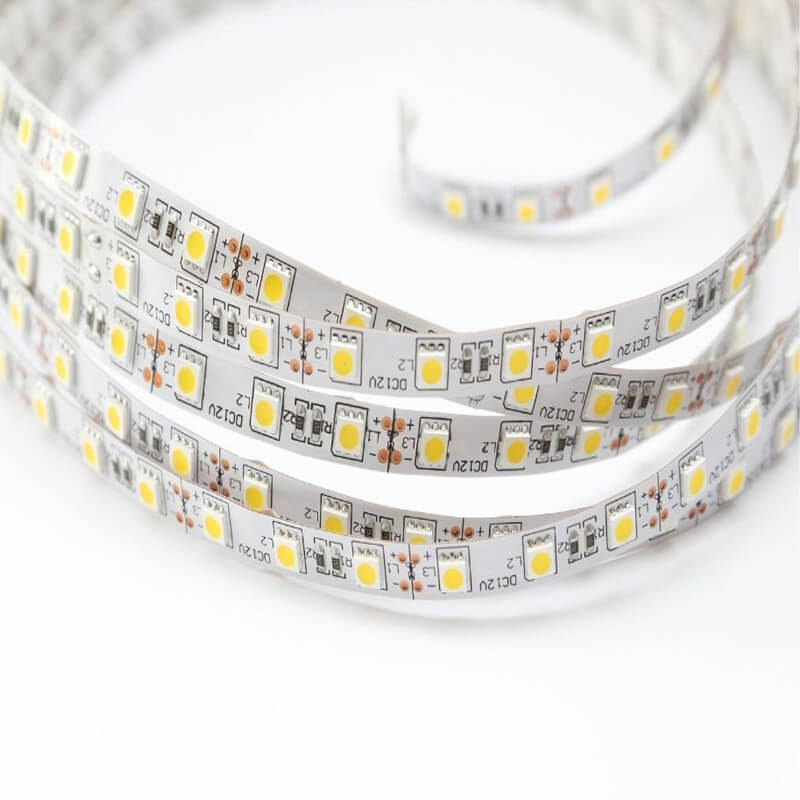 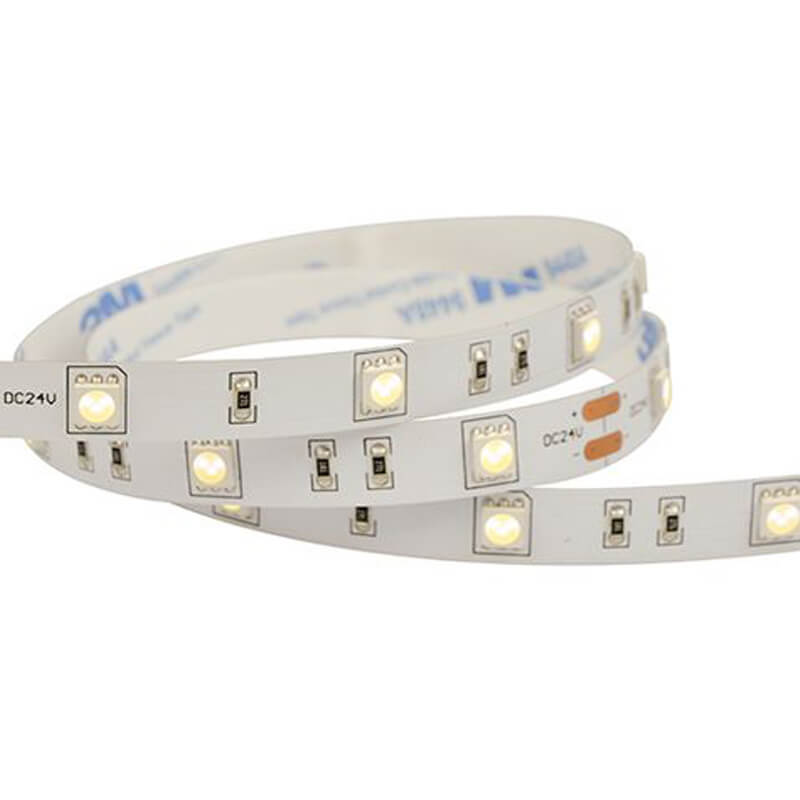 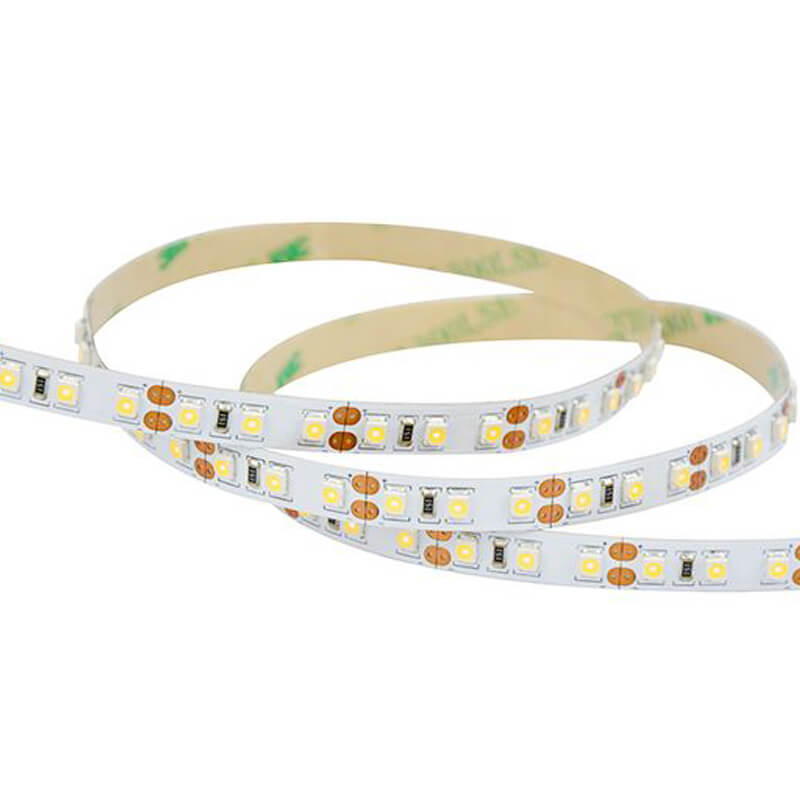 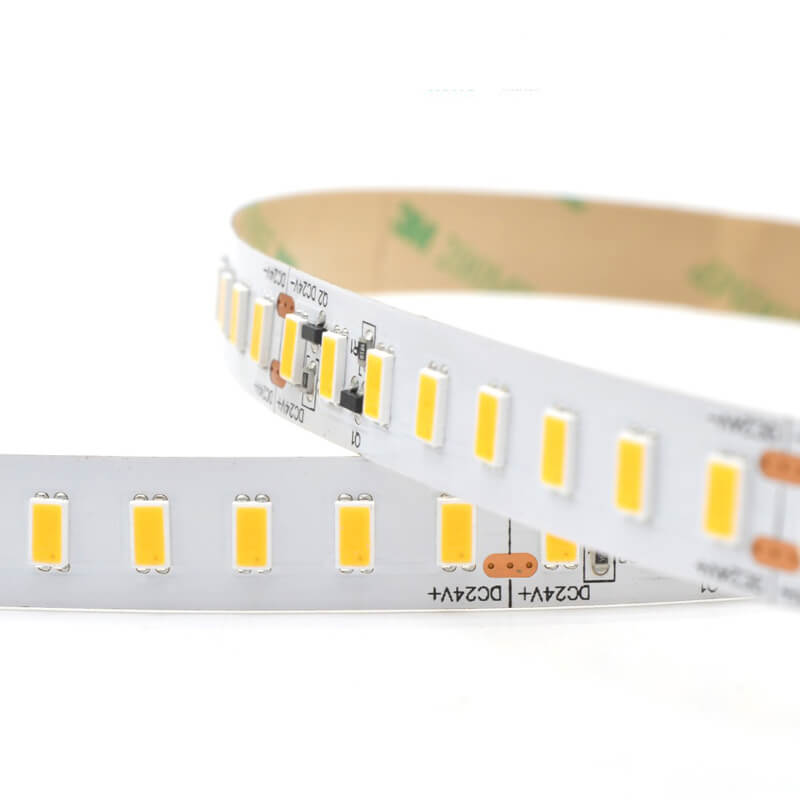 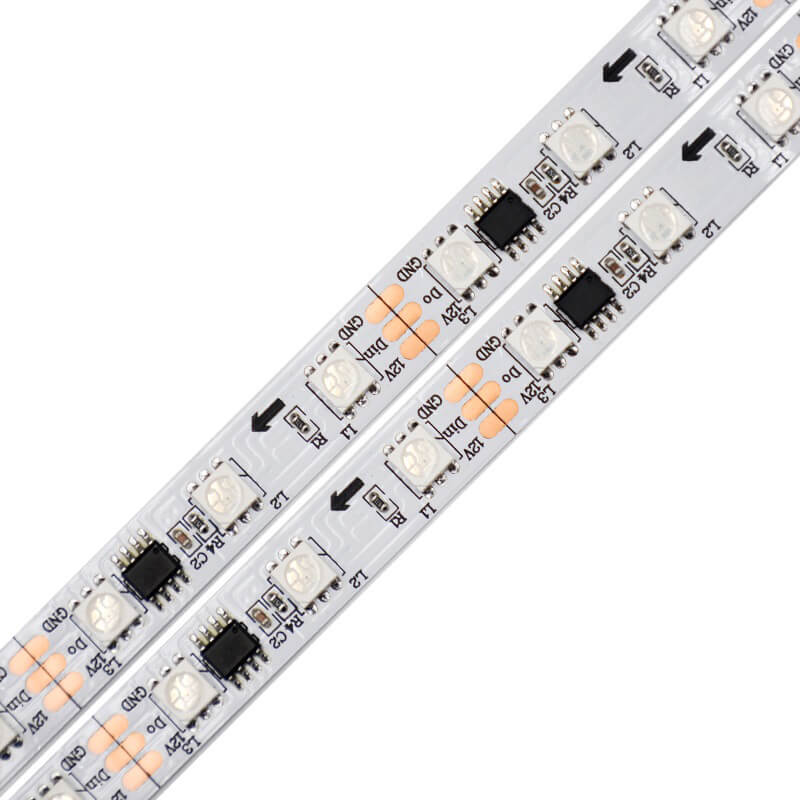 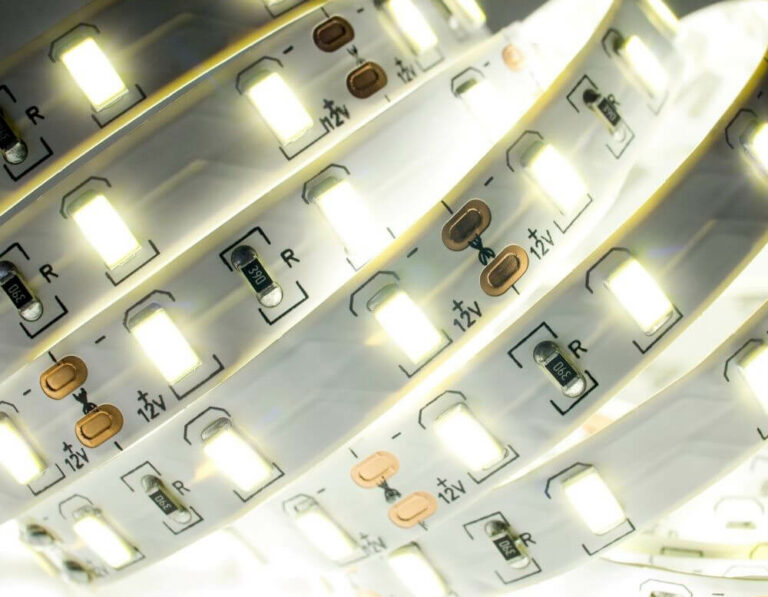 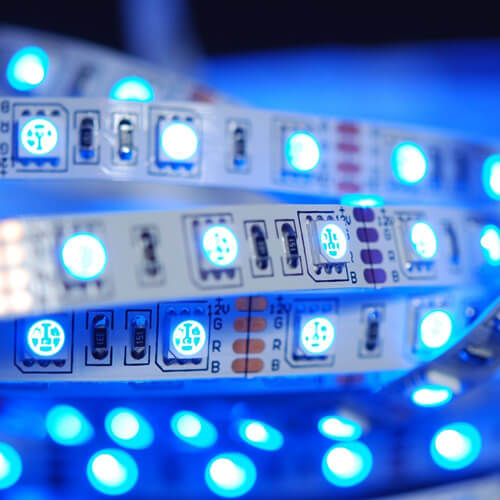 Color temperature is a unit of measurement that indicates the color component of the light. The color temperature of the conventional LED strip has three kinds, generally divided into warm white (2200K-3500K), positive white (4000K-6000K), cold white (6500K or more).

Most of the U.S., European guests prefer to choose warm white strip lights, light color is a little yellow, after the installation of the LED strip, will make the whole scene has a warm feeling.

Usually, the life span of LED is 80,000~100,000 hours; if you use high-quality raw materials, such as LED chips, silicon, PCB boards, etc., it will help extend the light strip’s life span.

The packaging of LED strip 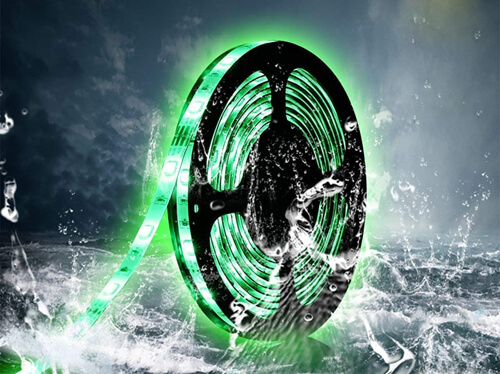 The LED strip light is assembled on the strip FPC (flexible circuit board) or PCB hardboard, which is popular in the market because of its long service life (usually the normal life is 80,000~100,000 hours), green environment, and applicable to different scenes.

Flexible LED Light Strip is the choice of FPC for assembling circuit board, with SMD LED for assembling, so that the thickness of the goods is only the thickness of a coin. Flexible LED tape lights can be cut at will, can also be extended as required without affecting the luminescence of the FPC material is soft, can be arbitrarily bent, folded, rolled, suitable for irregular and small space scenes, also suitable for advertising decoration in the combination of various patterns.

Rigid LED lights Strips is used PCB hardboard to do assembled circuit board, SMD LED for assembling. The advantage of the Rigid LED Strips is easy to fix, processing and installation are relatively convenient; the defect is that it can not be arbitrarily bent, not suitable for bizarre scenes.

LED Strip Lights has a wide range of uses, both for decorative purposes and can be used for lighting purposes. Many on the market use low-voltage LED chip strip; LED chip strip low cost, luminous angle, production process simple method, safety and environmental protection, easy to use, etc. by the market hot rod.

High-quality LED strip to use high-brightness SMD LED as the light-emitting components. The light color of the ribbon light is pure, soft, no glare, etc., suitable for different scenes.

Can you cut off LED strip lights? 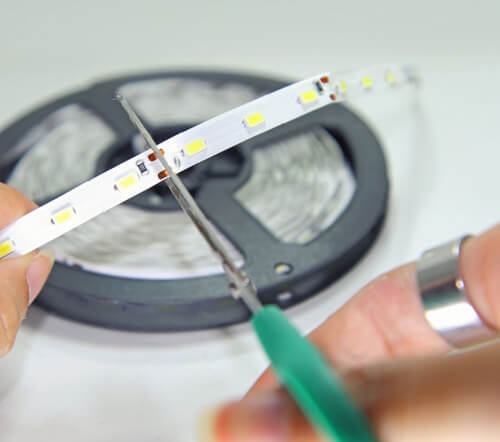 LED light beads to have different working voltage limits, so the LED strip can be cut in different positions according to the voltage of the used light beads. For example, LED ribbon light is a cutting position for each group. The LED ribbon is usually a circuit structure consisting of 3 LEDs in series-parallel as a group, and every 3 LEDs that can be cut for individual use.

The cutting time may cause a short circuit phenomenon, so after cutting, we need to check whether the copper foil and the following aluminum substrate link together. We need to separate to light the LED lights.

The light-emitting element of 12V LED strip is LED, the power of a single LED is very low, generally 0.05~0.07W, so the heat from it is not high. Even if the strip is installed under the fish tank as decorative lighting, it will not cause the water temperature to rise because of the large amount of heat generated.

Do LED light strips to save on electric bills?

The first thing to consider is the power of the lights strip, which varies by size per meter.
We commonly use LED strips with a power of 1.5W, 4.8W and 7.2W per meter, 7.3W.
The highest power consumption of 7.3W per meter to calculate, 6 hours of use per day.
Power consumption 43.8 Wh per day
1314 Wh per month, which is 1.314 kWh
That’s 15768 Wh per year or 15.768 kWh.
The above data shows that the power consumption of the LED light ribbons is not high, and it is both environmentally friendly and energy-saving.

The materials used in the LED strip, whether LED or FPC, are environmentally friendly and recyclable, so they will not cause environmental pollution or damage due to mass use.

The LED light tapes is powered by low voltage DC 12V/24, which is very safe and will not cause safety hazards whether it is used in home or commercial.

LED light strip is very easy to install, with fixed clips, wire channels, wire, wire mesh, etc. can be installed on various support surfaces. In addition, because the LED strip is light and thin, it can also be fixed by using double-sided adhesive—no need for professionals to install. You can enjoy the fun DIY decoration.

The normal service life of LED strip light is 80,000~100,000 hours, and its life span is almost nearly 10 years when it works 24 hours a day non-stop. Some studies have proved that the life span of LED tape lights is several times longer than that of traditional lamps.

LED strip should be installed in the correct way when installed. If overly distorted or using incorrect installation methods is easy to cause damage to the strip, while reducing the use of the strip time is not conducive to the maintenance of the strip. 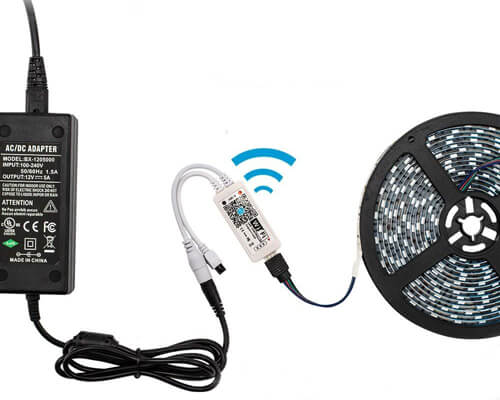 One of the best features of Flexible LED light Tape is that you can adjust the brightness, color, etc., the strip lights by connecting the LED controller. With the advancement of technology, LED controllers are also divided into infrared, WIFI, Bluetooth, etc., all of which can be controlled by cell phones or smart speakers.

Using a WIFI LED Controller or Bluetooth LED strip controller, not limited by the distance, you can control the strip at any time.

Using an infrared controller, the control distance of 15 to 20 meters, the longest distance can be controlled up to 30 meters.

DALI controllers. DALI controllers are routinely used in large industrial spaces, factories and warehouses, and they allow you to pre-program LED strips.

The choice of LED controller depends on the size of your project, the lighting effect you want to achieve, etc. 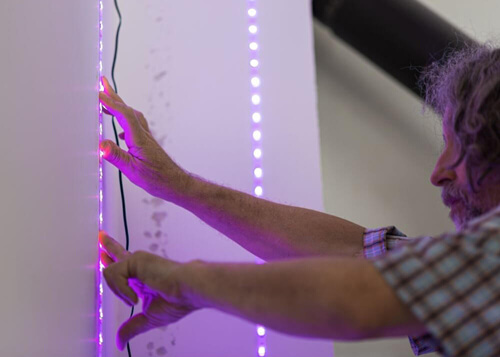 1. Do not energize and light up the LED ribbon lights before the whole roll of the led strip has been unpacked or stacked into a ball.

2. According to the installation length of the site, we need to cut the led strip, only in the printed cut marks (the cut marks) cut the strip. Otherwise, it will cause one of the light units does not light. The general length of each unit for 1.5-2 meters.

3. Only the same specifications/voltage strip lights can be connected, and the total length of the connection must not exceed the maximum allowable length.

4. LED strip connected in series with each other, each connected section, that is, try to light a section to timely find out whether the positive and negative terminals are connected to the wrong and each section of the strip of light emitted in the same direction.

5. The end of the strip light must be set on the PVC tail plug, tied with a clamp, and then sealed with neutral glass glue around the interface to ensure safety.

6. Because LED has a one-way conductivity, if you use a power cord with AC/DC converter, you should first conduct a power test after completing the power connection to make sure the positive and negative poles are connected correctly before putting it into use.

We are committed to educating, not selling. We take in every client’s project as our own. We believe in putting a smile on your face, from the first weld of our products to ensuring your project is complete.

Thank you for placing your trust in One Smart Lighting. We will not let you down!

Star Your Project
Scroll to Top